Just as i finished chatting with plgDavid (of M.A.M.E./M.E.S.S. team) by email, he was telling that
many "Pong-in-a-Chip" will be emulated in a near future (how soon ? That nobody knows...) but it's coming. So that's the reason that i'm waiting to do any simulations of dedicated games chips or "Pong-in-a-chip" if you prefer but that is not the best term since it's not all Pong games (there's also tank games, racing games, etc).

I was discussing (or arguing) with plgDavid that you can't dump any Dedicated Game Chips except
some few that has a ROM built-in (like those from MOS Technology - MPS-7600-00x series) and i was right: you cannot dump an AY-3-8500-1 - period! But... with the decap process, you can retrace the entire discrete logic circuit inside the chip (same as CPU's). Man did i felt like a complete jackass not remembering that process! (a HUGE shame on me!! It was completely out of my mind!) and that's what plgDavid was arguing and he is right!

But retracing a micro-circuit is a hell of a job, so to help out (if this will help), here's the links to the schematics of the "Palestra-02" (real Russian name: Палестра-02) which plays 5 games:

Mini-Football is in fact Hockey (or Soccer in Europe), Tennis, Volleyball (an exclusive game), Squash & Training (aka Handball) which both these games, you can choose the side of the wall (left or right) to play. The two target games which are included with the AY-3-8500(-1) are not incorporated in this console.

The console first came out in 1978 and was available in four different color casing. Here's a picture of the console: 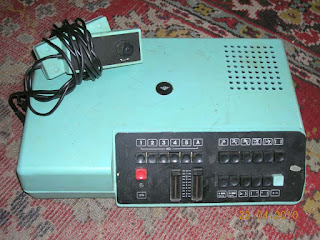 And here's the front panel with English indications: 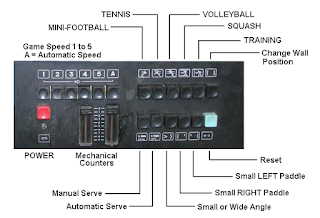 And if you want to see a video, here's the only one i could find on Youtube (made by antonzp):